By Toni Mackenzie on September 27, 2018 in Divorce, Happiness, Mindset, Relationships 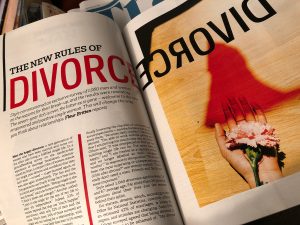 Learning to Fly Solo: Rebuilding Your Life After Divorce

In addition to offering one-to-one sessions with clients, I’m now in the process of creating my powerful new 7-Step programme, ‘Learning to Fly Solo’, which is focused on enabling divorced women to rebuild their lives by letting go of the past, starting to live in the present and move forward step by step to create the life they want to live. I’ve also set up a new free private Facebook group of the same name, to support and empower recently divorced women: http://bit.ly/learningtoflysolo

Divorce is definitely not an easy process for the majority of people who experience it. Although every situation is different, there are many universal feelings that are shared by those going through it. The process can stir up so many different feelings, of sadness, abandonment, grief, anger, resentment, animosity, uncertainty, fear, anxiety and much more.

Then there are the losses. It’s not only about ‘losing’ the person you chose to marry and expected to share the rest of your life with, but all the hopes and dreams for the future that you imagined you’d have, the feelings of security, having someone there who had your back, and often the loss of mutual friends who feel uncomfortable about appearing to be siding with either one of the divorced couple.

When the love between two people really has died – whether it’s one or both parties who are no longer happy in their relationship – change has to happen and often divorce is the only answer. However, getting divorced doesn’t have to feel like it’s the end of the world, even though for many people it can initially feel that way.

I know from experience what it’s like when it feels as though the world as you know it has suddenly come to an end. I know what it’s like to lose the love I believed I had from the man I married, the man I thought I would grow old with, the man who was supposed to be a father to our children – and to discover that those beliefs I’d carried were no longer a reality. I know what it’s like to lose my home and financial security and to be left alone to bring up two very young children, without any practical, emotional or financial support whatsoever.

I know what it’s like to feel shocked, sickened, devastated, saddened, hurt, rejected and abandoned on finding out that the husband I trusted implicitly was having an affair with another woman. I know what it was like to feel fearful of the future, not knowing where my children and I were going to live, how I was going to cope and how I was going to be able to support them financially, after giving up my career to be a full-time mum.

I also know what it’s like to pick myself up from that very low point in my life by eventually discovering my inner strength and resilience and becoming aware that I had deep within me everything I needed to take control of my life. From that point I began to grow my wings, rebuild my life and eventually learn how to fly, FLY – First Love Yourself… It didn’t happen overnight but step by step I was gradually able to grow stronger and move from ‘victim’ to ‘victor’. As I became more self-aware, I further developed my self-belief and confidence – which my ex. had strategically attempted to strip me of.

Some people choose to hold onto anger, resentment and feelings of hatred for years and feel righteous about doing so because they feel that their former partner ‘deserves’ it. What they often don’t realise is that by carrying these negative feelings, they are only hurting themselves. Some withdraw from life and develop a ‘victim’ mentality, feeling sorry for themselves and believing they are at the mercy of the actions of their ex. and will never be able to move on.

Many others believe that if only they could find someone else to love them everything would be alright and they would be able to feel lovable and happy again. They may rush into finding a new partner before they’ve dealt with their emotions and are in the right place to start a new relationship, then if that doesn’t work out it adds to their pain, anger, frustration, or belief that there’s something wrong with them – or that all men/women are untrustworthy.

Well, I have some potentially life-changing news. The truth is that no-one has the power to make you feel happy – or sad, angry inadequate – or anything else for that matter, unless you choose to give your power away. Your emotions come from inside of you, not from the outside and no-one can possibly control them but you. Accepting this fact is both freeing and empowering!

The truth is, the most important relationship you’ll ever have is the one you have with yourself. Once you learn to love, respect and value yourself you’ll be in a good place, free from negative emotions regarding your past relationship and you won’t need anyone else to love you in order to feel happy. When you get to this point the love that you attract from the person who is truly right for you will be the cherry on top of your cake and you’ll be able to develop a healthy relationship built on mutual trust, love and respect.

For me, the first step in learning this was when I began to study psychology – a subject I’d been fascinated by since my late teens. From there I moved forward to train for three years as a counsellor, then further down the line I qualified as a hypnotherapist, psychotherapist and life coach. Apart from my qualifications, along my journey I studied and learned from some of the greatest masters from the East and West – I read self-developments books, watched inspirational videos, listened to motivational audios, attended educational workshops and completely changed my mindset.

Eventually I knew I was ready to start my own private therapy practice as a transformational therapist and mindset coach and after helping many hundreds of clients to successfully transform their lives, I reached the point where I was ready to share the main lessons I’d learned with an even wider audience. I did this by writing my own self-development book, ‘Your Flight to Happiness: A 7-Step Journey to Emotional Freedom’, which became an Amazon bestseller virtually overnight and currently has over sixty 5-star reviews.

Within my book I describe some of my early experiences and negative messages and the subsequent limiting beliefs I developed as a result, affecting my self-belief during childhood and continuing into to adulthood. I also share some of the most powerful lessons I’ve learned over the years since becoming divorced, which have enabled me to let go of my irrational fears and self-doubts, learn to believe in myself, become empowered and take control of my life.

As it gets nearer to the launch date of my new programme I’ll be sharing news of how to enrol into it within my Facebook group. There won’t be any pressure on group members to book onto the programme, however, the chance to enrol on the beta edition of the programme at a heavily discounted rate will initially be offered to group members. Click on the link below to join me on my safe and nurturing private Facebook group page: http://bit.ly/learningtoflysolo

Toni Mackenzie's 5* Amazon bestseller 'Your Flight to Happiness: A 7-Step Journey to Emotional Freedom' is available from Amazon worldwide, as well as other leading bookstores.

You can download a free sample, which includes the introduction and first chapter, by entering your details below.

This website uses cookies to improve your experience while you navigate through the website. Out of these, the cookies that are categorized as necessary are stored on your browser as they are essential for the working of basic functionalities of the website. We also use third-party cookies that help us analyze and understand how you use this website. These cookies will be stored in your browser only with your consent. You also have the option to opt-out of these cookies. But opting out of some of these cookies may affect your browsing experience.
Necessary Always Enabled
Necessary cookies are absolutely essential for the website to function properly. This category only includes cookies that ensures basic functionalities and security features of the website. These cookies do not store any personal information.
Non-necessary
Any cookies that may not be particularly necessary for the website to function and is used specifically to collect user personal data via analytics, ads, other embedded contents are termed as non-necessary cookies. It is mandatory to procure user consent prior to running these cookies on your website.
SAVE & ACCEPT